Posted on October 23, 2011 by onlinewheatleys

We hooked up and headed North once more towards Exmouth and the underwater world of Ningaloo Reef.

Thanks to new friends at Coral Bay, we were given the chance to stay in Cape Range National Park. There is a complicated system for getting a camping spot there and we feared that during school holidays our chances would be very slim, but thanks to the generosity of our camping neighbours we headed off to stay at Osprey Bay.

We drove around the point of North West Cape and down into one of the southernmost campsites in the National Park, where we were greeted by our camp host, Rob. At Osprey Bay there are 16 campsites, well spread apart, each with a view of the saltbush and coastal scrub, and the waters edge beyond. Rob settled us in and gave us tips on what to see and do while we were there.

We barely had time to set up beside the sea before the kids appeared fully decked out in wetsuits and ready for a swim in the bay. BloggiE felt very excited to have our own beach. The water wasn’t too cold (well unless you had recently been in the Kimberley!), so we spent the afternoon watching the sea life and drifting with the current around the little beach of Osprey Bay. 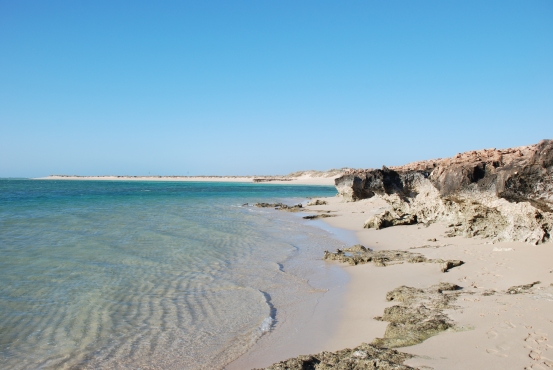 A little rocky outcrop lined the beach and at low tide the small sand beach was crawling with green and black crabs.

In the evening, at twilight, the moon rose over the distant hills and we watched the scrub turn red and gold as the great disc rose in the sky.

Uninterrupted view of the moonrise

Oyster Stacks was our top recommendation for snorkelling in Cape Range and was not disappointing.

Rocky to get in, but brilliant coral, green, luminescent, pink, purple, blue. Lots of schools of darts, tiny aqua fish and others to swim through. Fantastic coloured parrotfish, butterfly fish of all types, clams, a living Nemo experience.

Starfish of the rockpools

Unlike the Great Barrier Reef, you don’t have to travel far from the shore to see the coral and sea creatures. You can pop your gear on at the beach, swim out for around 25mtrs and begin to explore. The water at this time of year is warm and means that if you keep moving, you can enjoy a good amount of time snorkelling. It was the wind that came up each day that eventually spelled the end of each diving session.

We headed to famous Turquoise Bay, where the sheltered beach offered protection from the wind and current. And just a few metres out…. the reef again. 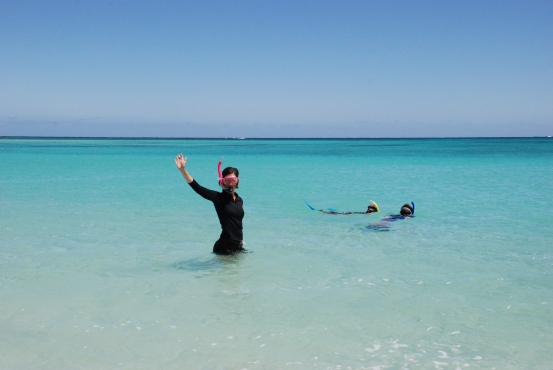 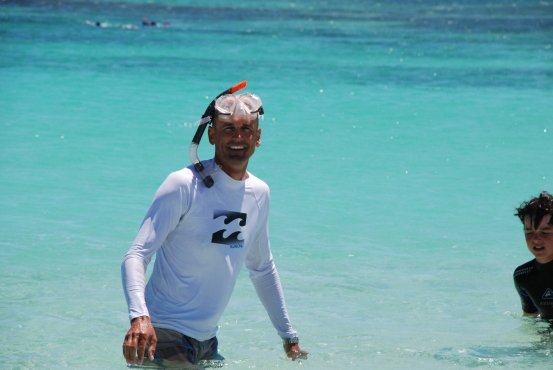 Spike (and axo1000) returned from their adventure spotting an enormous cod under a ledge, together with some sting rays.

And when we got back to shore… hundreds of day trippers had appeared on the beach. Lucky we took our photos early!

It was turtle nesting season and we spent some time spotting them in the water and at the edge. Late afternoons, we took books and drinks to edge of Osprey Bay to enjoy the light.

The entrance to our very own beach.

BloggiE on the Rocks.

As the nights came, the wind whipped through the camper. We even had to sleep with windows open to stop them turning into a sail! As we lay inside listening to the blustery weather, blankets under our chins, it was the first time we had wondered if Jake would be OK. Luckily, when it came to pack up, the poles were still straight, the canvas was in one piece and we were thankful that Jake had sustained no lasting damage.

With our days running out in WA it was time to begin our mad dash to Perth, our half-way home-away-from-home!