Posted on November 27, 2011 by onlinewheatleys

Firstly Cape Leveque, then Cape Range, now the trifecta with Cape Le Grand. Like the others, Cape Le Grand has been a place of great natural beauty with stunning beaches and a fantastic campsite metres away from the beach. In fact we have renamed the WA DEC who run the national parks,  “Department of Excellent Camping.”

I like the name Cape Le Grand. The domed granite peaks provide a backdrop to the incredibly aqua waters and white beaches. It’s  a genuinely grand setting. Suits its name perfect. The French admiral D’Entrecastreaux explored this area in his ships Esperance and Recherche. He named the cape after one of his officers aboard. It sits within Archipelago of the Recherche and, you guessed it, near the town of Esperance.

We opted to camp at Le Grand Beach, offering individual sites and more intimate setting rather than the famed Lucky Bay. Like Cape Range, there are a dozen or so spots, and the facilities come complete with fantastic campground hosts and hot showers. We marveled at being nestled amongst the dunes immediately behind the beach.

We were pleased when the Bradys, fellow lappers whom we met at the our campsite Arboretum, rocked up 10min after we arrived. With friends remet, we set about exploring the heights, depths and width of Le Grand.

Of the many granite peaks in the area, Frenchman Peak stands out as the only pointy peak among the rounded shapes.  It looked down into our campsite at us daily and we heeded it’s call. We set off to complete the ascent.

Near the summit was a large cavern, a window to the archipelago stretching from one side of the mountain to the other. We sheltered while the kids played peek hole hide and seek around the cavern. 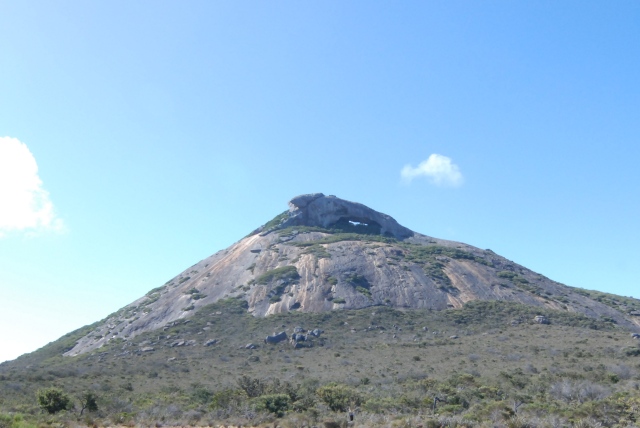 I wonder how it got the name Frenchman ?

Team Le Grand on the slopes of Frenchman. 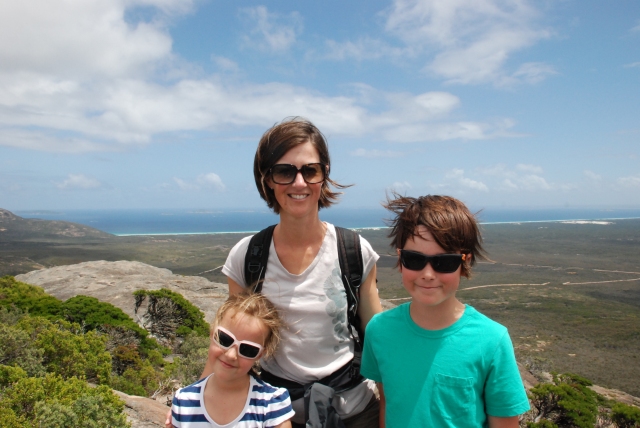 An afternoon chilling out at Lucky Bay was the reward after the ascent of Frenchman Peak. Lucky Bay is famed for its white sand. The sand was uniquely squeaky underfoot, super fine and very white.WA claims the whitest sand in Australia is here. But these claims are also made in Tassie about Freycinet Peninsula…. and in NSW at Hyams Beach.  I think we need a federal grant to continue our arduous journey to do some scientific research at each of these beaches to determine the winner!

A lucky day at Lucky Bay

A stunning 15km coastal walk links Le Grand Beach, Hellfire Bay, Thistle Cove, Lucky Bay and finally to Rossiter.  The track traverses the granite domes, along the white sand beaches and through wildflowers, surely making this one of Australia’s best coastal walks. We tackled Thistle Cove to Hellfire Bay, the two beaches between our campsite at Le Grand Beach and Lucky Bay. 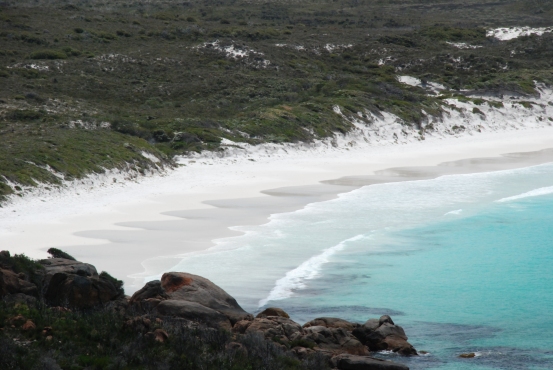 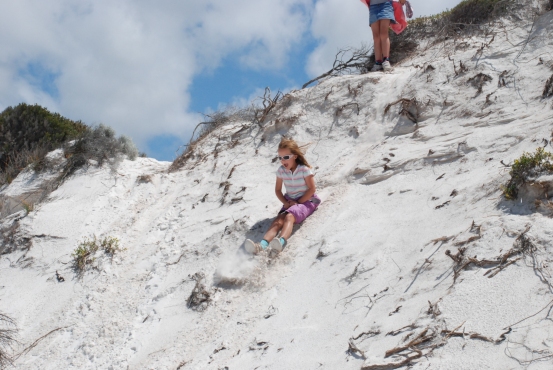 stopping for some dune action, 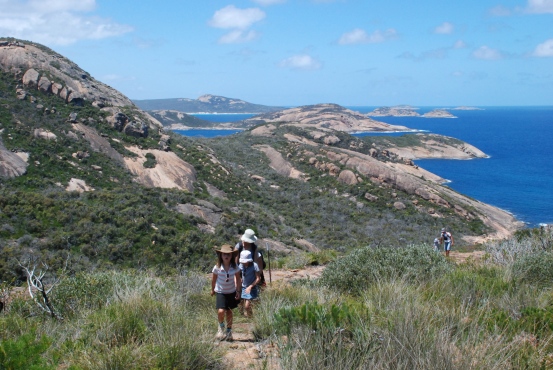 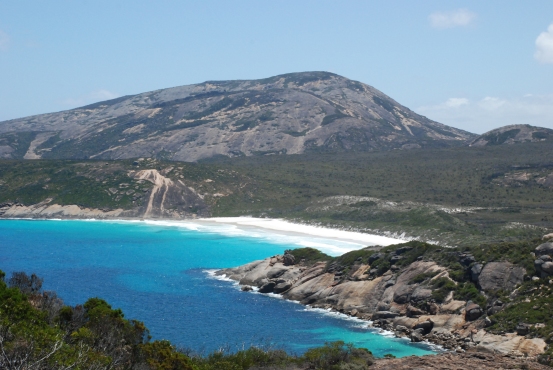 to our destination of Hellfire Bay

and having the traditional celebratory swim at the end.

Like many of our experiences so far, it is a pleasure to get back to camp, relax with friends and continue to enjoy this wonderful creation. Sadly for us, this serenity can’t last forever as it is time now for the big trek eastwards along the Nullabor.

The sun sets on our western adventures.