Last Days in the Territory

Posted on September 17, 2011 by onlinewheatleys

Saw our first serious road accident on the Kakadu Highway.

2 German tourists rolled a Wicked Camper. We were the first on the scene with a sat. phone and Spike called 000. (You can spot him in the pic) Aussies are good in a crisis. Guys were already directing traffic when we arrived, minutes after the incident. The Germans were then attended by an off duty ambo and a nurse holidaying in Kakadu. They had cuts, bruises and one had a fairly deep gash to the head. Eventually, with help on the way, we drove on and passed the police and rescue vehicles only 10 mins down the road. Great to know how swiftly services can arrive.

In Katherine, we did an afternoon of Aboriginal Painting at Top Didj. Spike & BloggiE did dot paintings and ax01000 and I did Rarrk (cross hatching) ones.

axo1000 consulting on his Yam masterpiece 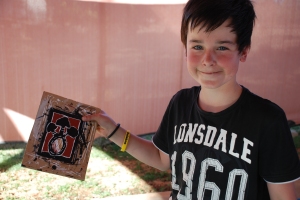 BloggiE dotting her own story.

We spent 2 nights in Nitmiluk (Katherine) National Park. After the resident campground animal being shoe-eating-dingos for so long, it was a nice change to have kangaroos hopping around the site. It was so hot, that we were glad to be canoeing on the gorge. 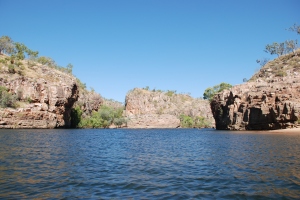 Just a breeze - enough to take a break and do a little floating.

And at the end, there was a creek with a fabulous current for a little floating without the boat!

And finally, it was time to clean out the fridge and drive to the border – Katherine to Kununurra – where we were inspected by quarantine and sent on our way west, with an extra hour and a half up our sleeve.

4 Responses to Last Days in the Territory