Posted on August 13, 2011 by onlinewheatleys

We have finally reached the point where we are actually excited about a road trip! Well that’s because it is to the big red rock.

After a few hours driving, we saw a very big rock which we thought was Uluru. When we looked again, we saw it was much more square-like.  It was actually Mt Conner. 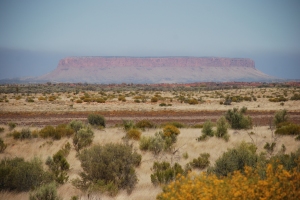 We got back into the car and kept driving. We finally saw a BIG RED ROCK !!! It was really big, really red and really rocky. It was much bigger in real life than we thought. In the evening we went to the Rock to see the sunset. There were heaps of people there and we took heaps of photos.  Here are some of them.

Sunset on a Rock 1

Sunset on a Rock 2 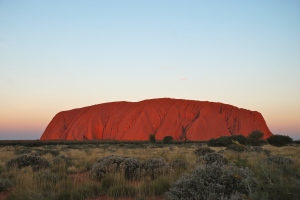 Sunset on a Rock 3

In the morning we drove out to the rock and we did a giant walk around the base. It took ages and Spike picked me up half way around and I got a lift back to the start. But mum did the whole 10km walk right around.

Base Walker extraordinaire! Are we there yet ?

We saw many wild flowers when we were walking around it and we were stunned! There were yellow, pink and purple flowers all over the ground. 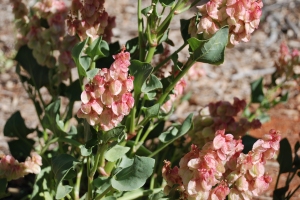 There were lots of sacred sites for the indigenous people and we saw lots of rock paintings. My favourite ones were the paintings of the leaves. Special rocks and water were used to make the paintings. 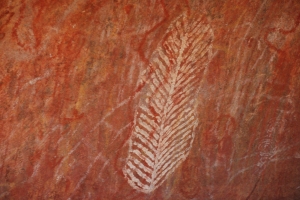 Looks good so far. . . What about some yellow?

We heard that Uluru is like an iceberg and it is actually only the tip of a gigantic rock.  It is made of arkose which is a type of sandstone. On one side of the Rock there were all sorts of patterns. One looked like Santa vomiting.

What can you see? And who is that AWESOME girl??

Up close at Uluru

It was such a fun day. Tune in next time.

This entry was posted in BloggiE and tagged Uluru, walks. Bookmark the permalink.

6 Responses to The Big Red Rock