Posted on August 10, 2011 by onlinewheatleys

Gap? Chasm? Gorge? Canyon? Which is which? And are they made of igneous, sedimentary or metamorphic rock? Who knows????

Simpson’s Gap is just 18kms out of Alice Springs and it is literally a gap in the West McDonnell Ranges. In between the two red rock faces runs a sandy river bed that was by no means full. In fact kids were climbing in the wide River Gums that grew on the river bed floor. 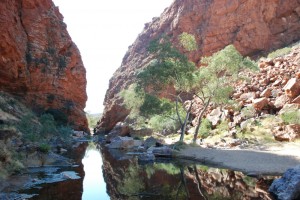 A perfect family picnic spot, the rocks from a recent landslide (ie this century) provide a playground for Black footed Rock Wallabies. Lots of signs saying “Do Not Climb the Rocks”, and we were thus surprised, as we tried to keep quiet and make no sudden movements, to see two bikini clad teenage girls rise up from the natural habitat of the endangered Wallaby and stroll back down the carpark!

Standley’s Chasm is a cleavage in the rock walls of the ranges about 5m wide. From top to bottom – about 30m – maybe. If you get there in the middle of the day and walk for 1.5k along a rocky (dry) creek bed, you are rewarded with a beautiful view of the sun shining directly into the chasm and making the red walls glow a fiery colour. The floor was sandy, and we suspected erosion! So we sat and had lunch with the 75 other people who had decided to check it out at midday… Must get off the beaten track.

A Chasm, of the Standley variety - sandstone - sedimentary it turns out.

At last some real earth upheaval at Ormiston Gorge. 340 million years ago something big created a rock sandwich and some spectacular walking tracks. We even know that the gorge is made of Quartzite (igneous possibly???) and the lovely layering effect created by limestone, dolomite and mudstone. 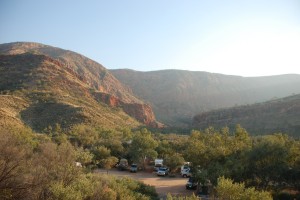 Upsizing to a Gorge - camping at Ormiston.

Our campsite was nestled at the foot of the gorge and came complete with howling dingoes at night. We did a fantastic loop walk, up to a lookout and on to the riverbed, where we scrambled over lots of rocks to make it back to the start. There is an almost permanent waterhole at Ormiston Gorge and although we thought it a little cold, it didn’t stop a bus of tourists holding races there one afternoon, or axo1000 perfecting his rock skimming skills. 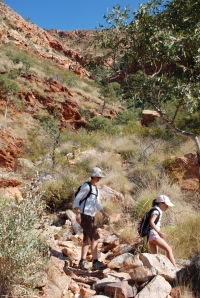 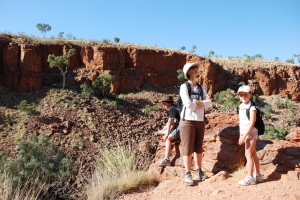 Taking it all in.

And Canyons? Well tune in next time….